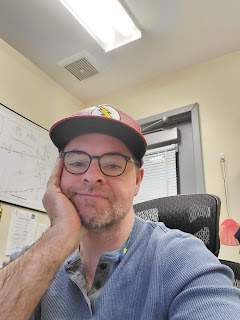 It is possible to wake up one day and realize that a half century has passed in your existence. I mean just think about that for a minute, because we all must investigate ourselves and realize that there was a time when we couldn’t even conceptualize that ever actually happening. Some may still have a hard time wrapping their mind around this concept, while others are simply shaking their head and saying, “there’s another obvious for Jeremy to point out and think he is original.”

The fiftieth birthday does make you think just a little more about what you did wrong in the first half century, and for some reason the good that has become of you gets lost in it all. It’s probably all the same as the fact that of the thousands of truly good people you have met along the way it’s always that total asshole that beat you up in sixth grade that sticks out like a sore thumb in your mind. It’s too bad that we (ok I, maybe you) dwell in these things but I am pretty sure it is natural now that my relatives are dwindling along with the years I have left. It’s more the regrets they talk about, but you can often steer them towards the good things, if you (ok I, maybe you) are willing to go there.

Oh God why is Jeremy back here talking about nonsense?

Well, that’s a good question, I know if I were reading this (thank you by the way if you are) the simple answer is, life has changed for everyone recently, and I find myself with a lot more free time on my hands. No, I didn’t lose my job, I am just one of the many Americans fortunate enough to have the option to work from home, and work for a company that asked me to do that. This adds about 2 hours to my day, between the driving to work, and the overtime I was putting in “inspecting” stuff. Unlike most people my mind is certifiably a terrible place to roam around in, and when that happens, yes, I write it down to try to find someone else inflicted with that issue. Sometimes it works, often it just keeps me busy.

Fine, lets get back to being 50 (the big five zero), but there is a lot of bull crap that gets floated around about the age of 50 (the official age where “over the hill” is placed on most gifts), and first and foremost is, that of the AARP is now sending you membership details, you’re old. Deal with it! Of course to be completely honest at 50 (29 years past the last birthday that was truly great) you bet your ass I sent in my $16 bucks for all those free discounts (bite me) and already have the text alerts coming in so I can know who to be angry at for disrespecting us seasoned citizens (***kin Comcast). The worst though, is the hypochondria really manifests around this time of life.

My grandmother (aka Greektradgedius Inyiddish) died about a half a year ago. Long story short, we had a falling out and I walked away from my family in total. One of my children contacted me to ask me to visit her after she got the cancer diagnosis, and I did drop everything and go out there to see her. It was the usual explanation of the cancer, life expectancy is not long, then all of the news that happened while I was away that would make me completely miserable, followed by a need for an explanation of why I walked away from the family. A woman who aged 20 years in the 2 I have been away and is dying, and the best I could do for her was to not tell her. Years of watching politicians made it easy to evade the answer, but more years of dealing with her should have told me it was never going to work. I walked away again, until I got the phone call that she is in hospice and I should be there. I dropped everything and went.

I got two things from this. First, I managed to get a new and rather decent relationship with my mother. The two of us sat alone at her bedside. The two black-sheep of the family, and we bonded in that. Sadly, it took me forty-five years to truly understand why she ran away before she was 30 and why I should have too. Don’t get me wrong, I truly do love every last family member I abandoned years back, but my own lack of people skills and common understanding made it so that the only gift I could give them and myself is one less thing to worry about, or feel guilty about. I ripped the band-aid off and I don’t regret it in the least.

Have you guessed what the second thing is yet?

Of course, you did. I spend half of my days now stretching and exercising my hips because I wake up every morning with sore hips. I’m sure it’s all an acute case of hypochondria, but I will talk to my doctor about it, if this COVID 19 thing ever goes away. Amusingly enough, at 50 (15 more years and the government will start paying ME!) I’m still able to pose in front of the mirror and pretend I’m Captain America (as long as I ignore all the grey hair, geeze only person in my family who didn’t lose his hair but I look like Santa Clause if I grow a beard) … (ok, the Goldberg, Santa Clause from the Dodge commercials not the one from the Coke commercials) … sorry got lost there a moment. In other words, I have done all the right things health wise so far, so I think I will be ok, I am just more willing to look into it, because it’s been a half century after all.