What A Difference a Day Makes 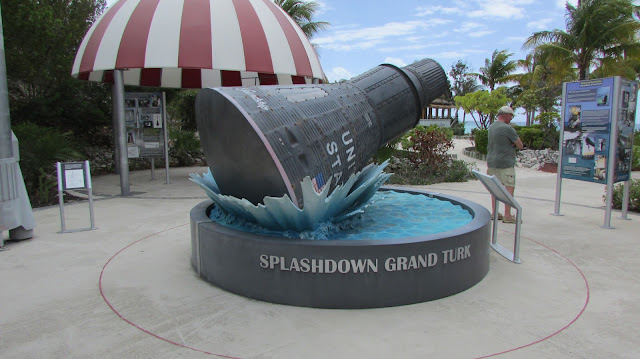 Things in my life turn on a dime, let me tell you. I spent last night talking to a beautiful Italian woman, right up until last call, which took us both by surprise. What was more surprising was that she ran into me today and sat right down and the conversation picked up where it left off. Just friends mind you, but it feels good to look cool in front of everyone. Of course my sunburn that I acquired yesterday has taken on a less dark red today, but it’s obvious that this one will take a few days to bleed itself down to the nice dark amber I would prefer to be walking around with. I really am such a pasty white guy, whose entire face is accentuated with white stubble and a sunburn.

Now of course I didn't get the sunburn while I was wandering around the Turks in the pouring rain. It was still worth it because I got all kinds of great pictures of all the Apollo and NASA stuff, including the antique capsule above. For a laugh the township that we ported at is called "Cockburn" which after spending time wandering around the decks yesterday with my shirt off, is the only part of my body that isn't burned, thank goodness.

Talking to most of the people I have met on the boat, I appear to be one of the lucky ones who has a seat in the Villa Rosa dining room. It’s the smaller of the two and I have had no complaints. The Black Crab, which is the larger of the two has been nothing but complaints. As I had mentioned before the food and the company at my dining table has been top flight, and last night also came with a huge plate of calamari, which my Italian friend had mentioned was actually as good as I thought it was.

Tomorrow will be the last full day of my cruise and despite how miserable it has been at times, I will miss it when it is over. The real world really does suck worse than the worst day on the boat. Just cleaning up after myself in the real world is reason enough to want to just spend the rest of my life on a cruise. Of course I am still at the phase of my life where I will have to go to my actual job to get the actual paychecks that afford me these little jaunts now and then. In the end I’m sure that without having something mundane to compare the less than mundane too, it would all start to get boring.
Posted by Jeremy Crow at 10:00 PM