I Drink (Coffee), Therefore I Am 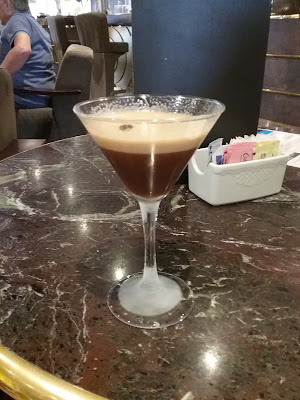 Again I sit in the coffee bar. Yesterday I managed to eclipse any walking climbing calorie killing record I have ever even factored. I walk around a lot looking at people and things, mostly people, and I also look at human nature. I judge, but I’m honest about it. I mean you have three types of people in this world.
Now I of course am travelling on  a ship alone full of Europeans (the one reading over my shoulder right now is getting kind of pissed off because he know I am describing him, but it proves my favorite saying, more on that in a bit) which either makes me prey to bad behavior or a teacher of good. Yeah it makes me an asshole but I judge therefore I am. Now to my point, because I don’t care how people judge me (I’m an awesome dude after all), you are either impressed with what a great person I am or you are wrong. Either way it doesn’t effect me at all. My favorite saying which would have served the European guy (that has since moved to the other side of the table behind me so he can leer, fuck em) is “what is said about you behind your back is none of your damn business”

Number 2 and number 3 people are shaking their head now because they hate that concept. Number 1 people are thinking, “wow maybe that’s why I don’t give a crap and am generally a happy person” or perhaps “no shit Sherlock.” The European guy who has now since left would have been happier not reading over my shoulder or perhaps wouldn’t have taken the chair from my table without asking and not started my train of thought to read over my shoulder. His friend who told him he was an asshole for doing that could have read over my shoulder but never did and then again  I wasn’t talking about him until now. See how that works?

That picture to the left is a tiny martini glass and it was what I got when I asked for an ice coffee. If I actually had to pay for it I would have forked over a whopping 7$ for it. It was ice cold had a hint of chocolate and ground up coffee beans in it, and was without a doubt one of the most delicious things I have ever tasted. I judge that to be a wonderful experience and I am happy that I was here for it. I’m going to have another one and then hit the gym for the second time today. Strangely enough I get along really really good with the European meat heads. Of course they all got a pretty good chuckle off of me when I learned the hard way that all of the weights are in kilograms and not pounds. When I grabbed weights that said 10 my ego struggled through 22lbs of 10kg and they knew exactly what it was. One guy who lightened the mood said “I chipped a tooth when I grabbed a 10 on a Carnival cruise and they meant pounds.”